'Violence and conflict have been a feature of human life throughout history. Starting with simple weapons, people have developed ever more advanced methods to kill one another. Technology has dominated warfare since the early 1900s, and an astounding 190 million people may have been killed during the 25 biggest conflicts of the 20th century.

The US has embraced Full Spectrum Dominance, the belief that superior technology in all fields guarantees victory, though critics disagree. This has led to ever more sophisticated and expensive aircraft and a proliferation of unmanned systems, including robot aircraft to attack targets. Future plans may include swarms of flying robots, while an existing desert race for driverless vehicles may pave the way for autonomous supply vehicles.'

You can read more at the above link.
Posted by Kingsley at 09:05 No comments:

Some people think that clandestine operations are taking place via the secret military - well... I'm not one to claim any knowledge or judgement: yet I can tell you that Google Video is showing some interesting film clips:

Secrets of the Matrix

Everyone has there own minds to make up... !
Posted by Kingsley at 08:58 No comments:

I thought it was worth making mention to an add document currently doing the rounds in the Websphere concerning a recent 'transmission' to us on Planet Earth from some benign higher intelligences (another 'sign' to us like the Georgia Stones?).

This document/transmission asks us whether we wish for our non-terrestrial friends to physical manifest and show-up or not. And they list the reasons why now is an important time for such a conscious decision to be taken.

You may dismiss the article, yet it does raise some interesting points for which I feel the article is worth reading in itself. If you have the free will to read it, what have you to lose??

CHANGE THE WORLD! "DECIDE WHETHER WE SHOULD SHOW UP!"
Posted by Kingsley at 16:22 No comments:

A necessity on which our future depends

'What we take to be reality is really more primitive short-term rule of thumb. For example, we tend to look at events one-sidedly. We also assume, without any justification, that an event happens as it were in a vacuum. In actual fact, all events are associated with all other events...If you look at any action which you do, or which anyone else does, you will find that it was prompted by one of many possible stimuli; and also that it is never an isolated action - it has consequences, many of them ones which you would never expect, certainly which you could not have planned...It is only when we are ready to experience our inter-relation with the organism of life that we can appreciate mystical experience. That is to say a direct and total perception of truth' Idries Shah - The Sufis

The Sufis aim to awaken humankind from its sleep - 'the sleeper must awaken' - and to do so they aim to activate organs of higher perception through the development of inner processes that are inherent in humankind: to awaken to the purpose and function of conscious evolution:

"In Sufism, a person cannot learn until he is in a state in which he can perceive what he is learning, and what it means" - Idries Shah.

'The Sufis assert that the present diffusion of this teaching is due to humanity's current need for normal development...The Sufis use a new point of view in order to overcome the conditioning which our materialistic society has imposed. Our ills are due mainly to the one-sided rationalism of our culture and the loss of the intuitive faculty that would have enabled us to gain access to an area of knowledge which cannot be reached through the intellectual mechanism. They believe that for the first time in history conscious evolution has ceased to be a choice open to man and has become a necessity on which our future depends'
Posted by Kingsley at 14:20 No comments:

To view an interactive display showing the evolution of computing from ENIAC in 1946, to the Earth Simulator supercomputer in Japan that performs more than 35 trillion calculations each second in its quest to model planetary processes in 2002; to CERN’s Large Hadron Collider in Switzerland in 2007 - see here.

The Future is being created.
Posted by Kingsley at 09:11 No comments:

Evolutionary Guidance from the Georgia Guidestones? 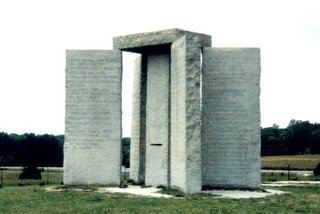 The Georgia Guidestones - seen above - are puzzling: their history is mysterious; their message a mixture of reason, politics, and eco-spirituality.

What are the Georgia Guidestones?

"The origin of that strange monument is shrouded in mystery because no one knows the true identity of the man, or men, who commissioned its construction. All that is known for certain is that in June 1979, a well-dressed, articulate stranger visited the office of the Elberton Granite Finishing Company and announced that he wanted to build an edifice to transmit a message to mankind. He identified himself as R. C. Christian, but it soon became apparent that was not his real name. He said that he represented a group of men who wanted to offer direction to humanity, but to date, almost two decades later, no one knows who R. C. Christian really was, or the names of those he represented."

I've been away for a while... on travels... keeping the right-brain fed. I have been thinking recently of Robert Anton Wilson's writings - especially Prometheus Rising - whereby he outlines the metaprogramming of the brain. This book influenced me when I first read it in my early 20s: I feel its now time for a re-visit...

I also might revisit an interesting little book that places 20th Century science alongside some of the findings of Sufism, called 'Sufism and Beyond' - worth a look...

The days of Leary, Casteneda, Huxley, Kesey, et al were an important primer.
Posted by Kingsley at 16:44 No comments:

New Consciousness for a New World

What I'm Listening To