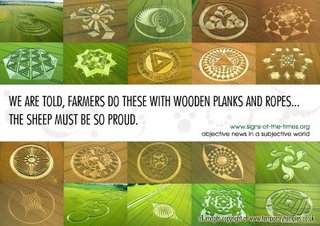 Either something is happening, or I am simply dumb...dumb, dumb..
Posted by Kingsley at 17:19 1 comment:

A recent discussion on brain experiments - 'Creepy Experiment Exposes Paranoia and Sense of Alien Control' - tells how a woman had doctors to probe her brain in order to find out where her seizures came from... yet this probiing led the woman to experience the 'illusion' of being shadowed by an eerie presence...:

'When the patient sat and embraced her knees with her arms, she noted the "man" was now also sitting and clasping her in his arms, which she described as unpleasant. When asked to read a card in her right hand, she noted the shadow tried to interfere, saying, "he wants to take the card" and "he doesn't want me to read."

Researchers said today that what they learned from this woman, who is not named in their scientific paper, could help shed light on psychiatric effects, such as feelings of alien control, paranoia and persecution.'

Is this a product of brain activation or the unexpected consequence of activating certain latent sensory capacities?

See also - 'Mind Control by Parasites' - which lovingly reminds us that 'Half of the world's human population is infected with Toxoplasma, parasites in the body—and the brain. Remember that.'
Posted by Kingsley at 17:12 No comments:

The Emerging Mind of the Cosmos 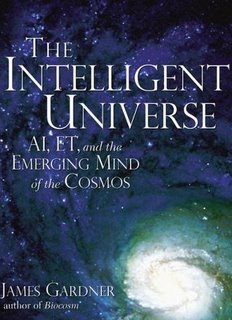 Several years ago James Gardner published his first book 'Biocosm' which I mentioned here and which postulated 'that the cosmos possesses a utility function (i.e., some value or outcome that is being maximized) and that the specific utility function of our cosmos is propagation of baby universes exhibiting the same life-friendly physical qualities as their parent-universe, a sort of cosmic reproductive organ'

In his new book 'The Intelligent Universe: AI, ET, and the Emerging Mind of the Cosmos' (not yet published) Gardner envisions a final state of the cosmos in which a highly evolved form of group intelligence--a cosmic community--marshals the assets of matter and energy bequeathed by the Big Bang and engineers a cosmic renewal: the birth of a new baby universe endowed with the same life-giving propensity that our cosmos enjoys:


"The purpose of this book is to tell an extraordinary story. You will meet a senior NASA official whose passion is investigating the probable impact on religion of the discovery of extraterrestrial intelligence; a computer scientist who is coaxing software to undergo a special kind of Darwinian evolution, thus becoming ever more adept and financially valuable over time; and a technology prophet who, in my view, is the true contemporary heir to Darwin's intellectual legacy.

"You will also meet a fascinating cast of non-human players likely to have leading roles on tomorrow's cosmic stage. They include:

• Super-smart machines capable of out-thinking humans without breaking a sweat;
• Speedy and cost-efficient interstellar probes consisting of elaborate software algorithms capable of "living" in the innards of alien computers they may encounter on far-off planets; and
• Intelligent extraterrestrials, which SETI researchers have not yet discovered but whose probable existence is strongly predicted by my Biocosm hypothesis.

"The Intelligent Universe, then, is a kind of projected travelogue--an imagined future history--of the cosmic journey that lies ahead. The foundation for that projection--the defining leitmotif of that imagined future--is a vision of the deep linkage between three ostensibly separate phenomena: the appearance of life, the emergence of intelligence, and the seemingly mindless physical evolution of the cosmos. In discussing these topics, the book will not only provide news dispatches from the frontiers of cosmological science but also offer musings about the philosophical implications of emerging scientific insights for our self-image as a species."

Yet it's all down to how one defines 'Intelligence' - and in whose terms: the danger is anthropomorphic approaches to this understanding...
Posted by Kingsley at 09:50 No comments:

Now I feel this deserves a mention - The Lifeboat Foundation:

According to their statement - 'The Lifeboat Foundation is a nonprofit nongovernmental organization dedicated to ensuring that humanity safely adopts increasingly powerful technologies, including genetic engineering, nanotechnology, and robotics/AI as we move towards a technological singularity.

Lifeboat Foundation is pursuing a variety of options, including helping to accelerate the development of technologies to defend humanity, including new methods to combat viruses (such as RNA interference and new vaccine methods), effective nanotechnological defensive strategies, and even self-sustaining space colonies in case the other defensive strategies fail.'

Also, the list of Lifeboat Foundation Scientific Advisory Board members today totaled 200 with the addition of multidisciplinary scientist/author Howard Bloom, who is bringing together space scientists to explore beaming solar power from space and setting up a colony off-planet in case humanity is extinguished due to warfare.

What a community of thinkers! Lets hope such a vision comes married with humanity & spirit...
Posted by Kingsley at 17:14 No comments:

I've been impressed with a site called Montalk.net that deals with diverse subjects in an intelligent and clear manner: it covers such topics as Earth energies, Gurdjieffian subjects, Stages of Conscious Awakening, Realm Dynamics, and much more...

...as well as some thoughtful reflections:

'The best sources of truth help you realize what you’ve known all along.'

'The Universe never lets you down—in the long run.'

'Spiritual fulfillment is about fulfilling the spirit of others.'

'Your conscious mind can only focus on one thing at a time; to focus on everything, perceive that everything is one.'

Everything needs to connect now... and its up to us...
Posted by Kingsley at 17:05 No comments:

New Consciousness for a New World

What I'm Listening To